Share a memory
Obituary & Services
Tribute Wall
Read more about the life story of "Tony" Anthony and share your memory.

"Tony" Anthony Arthur Kirch, age 61 of rural Barneveld died unexpectedly on Thursday evening, September 1, 2022 in Bagley, Minnesota while there bear hunting. He was born on December 28, 1960 in Prairie du Sac, Wisconsin to Arthur Anthony and Helen Margaret (Marty) Kirch.  He grew up with his family living in Madison for his early years until they moved to rural Barneveld when Tony was in grade school.  He then attended Barneveld grade and high school, graduating in 1979.  Tony began his farming career soon after high school on the same farm where he has lived and farmed all his working years.  Tony met Rhonda Gilbertson at a dance in Hollandale soon after they both graduated.  They were eventually married on September 11, 1982 at the Hollandale Lutheran Church.  Together they operated Kirch Valley Farms for the rest of their life together.  The farm was predominantly a dairy farm operation, but later they expanded into raising beef cattle.  He spent his life farming, and was one of the best around.  He was a well-respected farmer in the area and loved sharing his thoughts on how to do things and be successful.  He would often say “Pay your bills first, and play later”.  He prided himself in hard, honest work, and passed that along to his family.  Tony would say “there are two types of people, those who are farmers, and those who wish they were farmers!”.  Tony was going to tell you like it is, never sugar coating anything.  You always knew what he was thinking because he wasn’t afraid to tell you, even if you weren’t going to like it.  Maybe especially if you weren’t going to like it!  If you never found yourself chasing cows that got out with Tony or coming back from the shed without the tool he asked for, consider yourself lucky.  Tony was a member of New Hope Lutheran church in Hollandale, was involved with the Barneveld Advancement Association, was a member of the Wisconsin Bear Hunters Association, and the Tri-County Bear Hunters.  He loved hunting and spent his falls in Northern Wisconsin and the U P Michigan, and enjoyed recently sharing that with his oldest grandson, Gage.  Tony loved to tell stories and visit, and had a hard time turning down a good prank and a chance to get someone riled up!

The service will be livestreamed on the Saether Funeral Service Facebook page.

A visitation for Tony will be held on Wednesday, September 7, 2022 from 4:00 until 8:00 PM at New Hope Lutheran in Hollandale.  A funeral service will be held on Thursday, September 8, 2022 at 11:00 AM at the church.  Rev. Chris Strohm of New Hope Lutheran will officiate.  Burial will be in the Long Valley Cemetery in rural Hollandale.  Saether Funeral Service of Blanchardville is assisting the family.  Online memories and condolences can be shared with the family at saetherfuneralservice.com

To send flowers to the family or plant a tree in memory of "Tony" Anthony Arthur Kirch, please visit our floral store.

Video is available for this event 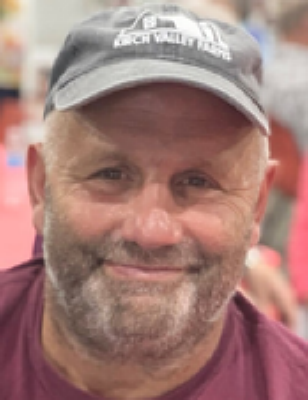